FAO’s Thirtyninth Conference (in June, 2015) adopted Resolution 4/2015 on antimicrobial resistance (AMR) which recognized that it poses an increasingly serious threat to public health and sustainable food production, and that an effective response should involve all sectors of government and society

In this regard, Prof Jaap Wagenaar, who is an expert microbiologist from the Utrecht University Veterinary Faculty, visited Myanmar as International Consultant on AMR from 31 January to 3 February 2017 with support from the FAO Regional Office for Asia and the Pacific (RAP) and FAO Myanmar. FAO is coordinating this AMR National Action Plan (NAP) development by working closely with the World Health Organization (WHO): AMR is very much a One Health issue!

In his visit in Myanmar, Prof Wagenaar met the Director General of Livestock Breeding and Veterinary Department (LBVD) and the Rector of the University of Veterinary Science (UVS) under the Ministry of Agriculture, Livestock and Irrigation. He also discussed AMR issues with the Deputy Director General of the National Health Laboratory (NHL) under the Ministry of Health and Sports, and with executive committee members from the Myanmar Livestock Federation and the Myanmar Veterinary Association.

Laboratory visits included the LBVD Veterinary Diagnostic Laboratory and the LBVD Veterinary Assay Laboratory. He also visited the UVS Pharmacology and Microbiology Departments and gave a talk on AMR to final year veterinary students of UVS. An additional visit was made to a veterinary drug shop in Nay Pyi Taw. In his visit he reviewed laboratory capacities, and antimicrobial usage (AMU) as treatment and prevention of diseases and as growth promoter.

Prof Wagenaar’s mission was an important first step towards developing Myanmar’s AMR-NAP. It will be followed up by a WHO expert and a further input from the animal health side. These missions will help Myanmar to fulfil its obligations to develop an AMR-NAP this year, as agreed at the UN General Assembly 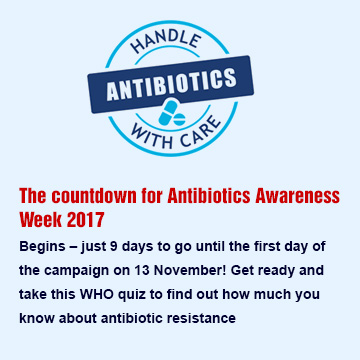